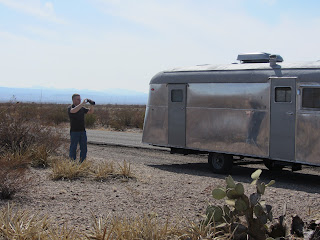 Having written about the Wagon, I cannot leave the trailer out of it, can I?

So, let's check the same points as we did with the car...

Heating? Not so much of an issue. When Erik got the fridge running, it was almost sufficient to heat the interior on its own, and the electric heater more or less cleverly hidden inside the old heater's shell had much less of a job to do. The main issue I had with the KC was, as with the car - doors.

The doors were notoriously hard to close once you got them opened - especially from the inside. Some violence was needed, which made nighttime excursions to restrooms an exercise in stealth which was not even attempted.

From the outside I tended to give the door handles one tug, and then leave it to Erik, since I could feel the metal giving under my hands and I didn't want to break the handles. In the end one came right off in Erik's hands after I had moved back, once again having gotten the feeling that it was giving too much. He had a new handle lying about, having intended to exchange it eventually, but that meant an evening of playing locksmith became a more immediate concern.

The only other thing worth mentioning is that it was like sleeping on a small boat - rocky. It meant two things: Another point against moving stealthily about, as any movement made the ship, I mean, the KC, rock wildly. It also meant I slept very well, being rocked to sleep by our movements and the wind - or at least I did until the wind picked up and the movement combined with the sound of an approaching, hooting freight train on the other side of the road was enough to wake us both, the first night in Marathon...
by Silme at: 19:30