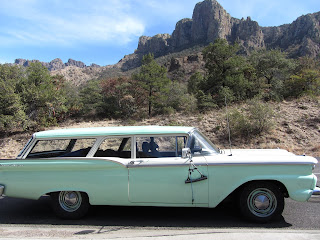 The Wagon has a personality, and she has some issues that range from annoying to funny, depending on your mood that particular day, the weather, and how fast you want to go from point A to B.

She is a beautiful girl, no doubt about that, but hey.. let's talk about what was NOT so great about her (mainly to give y'all some more detail of my trip, the things that were repetitive and thus are not being mentioned often - or at all).

Erik was late coming up to Midessa - and missed meeting up with his friends the weekend before - due to the Wagon overheating and thus having to go slow. She was mostly doing fine without the trailer at this point, but with the trailer the temperature would slowly creep upwards until it was bumping 250F and the need to stop and let her cool off was apparent. When she got hot, she was happy to blow hot air at our feet, which was a feature that ranged from lovely to exasperating as it got hotter in the car.

The driver side door wouldn't open from the inside, and it was thus necessary to roll down the window to open the door and get out. Not too much a hassle, until, as we were crawling south from Midland/Odessa towards Fort Stockton (with frequent stops to let her cool off), the window decided to not go back up. So, now we had hot feet and cool heads. Later that day, after the sun went down, she suddenly stopped overheating and rolled along happily from somewhere between Ft Stockton, past Marathon and until somewhere around the entrance to the park. Unfortunately, that meant she refused to blow hot air at MY feet just as the temperature was dropping (apparently she was still warming Erik's side up). My arthritic joints soon protested the chill (by sending bursts of intense pain up my nerves) and I spent the rest of that night's drive huddled under a blanket which Erik kindly dug out of the trailer for me when I timidly mentioned that I was getting cold.

So, there we were, driving along in the pitch black desert night, now with a car that was temporarily not overheating, window down, Erik warm, me cold, when the lights suddenly went out. Noone knows which speed we were actually driving at, since the speedometer was not hooked up, but we stopped quickly enough as Erik hit the brakes. This happened once or twice more before we determined for sure that it was the brights that would suddenly turn themselves off, and so we drove without them, only flashing them on now and then. I developed a temporary fear of curves in the road due to this... it passed, but that evening any turn we had to make had my pulse going up.

Driving without the trailer was fine out in Big Bend, even going up some at times rather steep hills. Hooking the trailer back on to leave for Marathon meant frequent stops again. I swear, that car needs to stop and breathe more often than I do. She was doing fine for a couple of days, trailer-less, but when we left for El Paso to fly out (Erik back to Ft. Worth for drill, I going home) at the end of the week she was going hot even without the trailer. From what I hear, this was getting worse and at the end of the month she was apparently overheating without the trailer too..  What measures Erik was taking to try to solve the problem did not work out. If she has been fixed since then I do not yet know - the saga continues...
by Silme at: 12:32