Baby clothes for the boss-man. 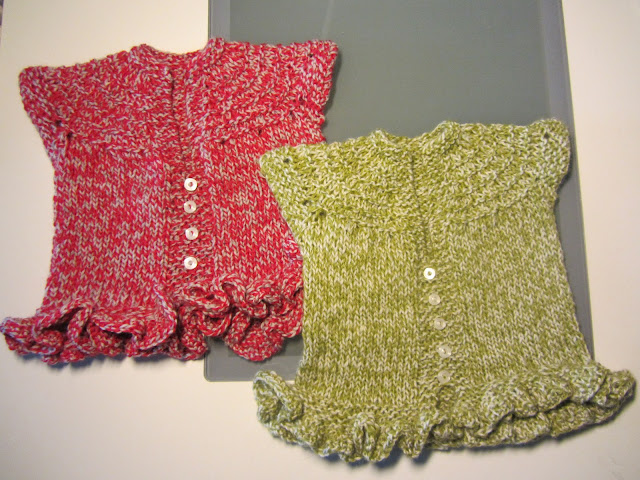 Credits:
I followed a trail of free patterns around the Swedish blogosphere and wound up taking the most inspiration from BlueWhiskey, but using garter stitch on the front instead of reverse stockinette, as well as choosing to finish it differently (with a little split adding to the impression of a cardigan rather than a sweater) and some frills since they are girls.

The green one was the first I knit and special thanks go to Brewdog, my coffeebrewer (a cup of coffee in between every beer to keep me awake), and to Johnny Paycheck.
The red one's top half has to be credited to tequila, to Erik who brought the tequila, and to Brandi Carlile, while the lower half to copious amounts of iced coffee and to Awolnation.

I must admit, I don't think knitting baby clothes is my cup of tea. It is a long time since I was so glad to be done with a project. Hope the girls will like their new clothes, though.
Posted in: Arts and crafts, knitting, Yarn and textile crafts
Newer Post Older Post Home