Before I went to Norway I spent a week in the Åland archipelago, in a cabin we rented there. There was a sauna and a rowboat and all sorts of nice things, including alot of nature for me to take pictures of. The last day before we were leaving, we were going down to the boat, but behold! The way was blocked by a family of swans, the same family which I had been trying to get good pictures of earlier in the week. I finally got some pictures of them close up at least.. 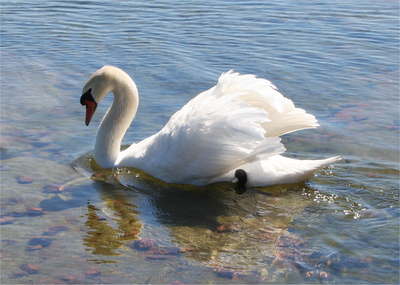 And a couple of other pictures that show what happened before they all swam away:

It wasn't actually as easy and smooth as it looks there, we were hanging around for quite a while, even contemplated trying again later, there was lots of hissing from the other party, and Skid threw alot of stones at the water, which made them rather unsure (was it dangerous or not). The male was actually several times going back to sleep, putting his head under his wing, it was Mummy doing all the hissing and in the end taking her babies away (we presume).