Catlings. They are siblings, six months old. He is a tuxedo, she is all black.

Olivia. Tiny, tough. A really loud purr from a small body that is easily teased out. Looks like a kitten still. She might meow if she loses track of her brother, he usually returns to her side if she calls. Not afraid of new rooms or new situations (but a bit worried about me walking about if she is on the floor). Likes to carry things around, and it is more fun if it is something she isn't allowed to have. Sheafs of important papers, yarn tags, shoes. I wonder if she will learn to fetch. 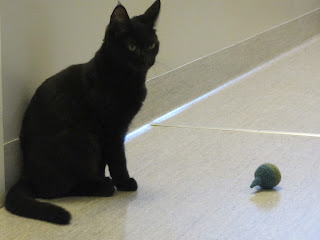 Alasdair. Looks rather adult, but slim in the body still. So long legs - he looks like a coyote with his long legs and eyes reflecting light back at me. Much bigger than his sister and a big chicken. If there is a new room he lets her investigate first before he dares go in, he patiently waits until she sounds the all clear. Has the loudest meow I have heard, and the most silent purr. The first mostly heard at night when he gets scared by - new home, the darkness, I don't know. Meow!Meow!Meow!Meow! all night long. Last night I left the light on and he squawked less. His purr is soundless, but a strong vibration in his body. A prius. 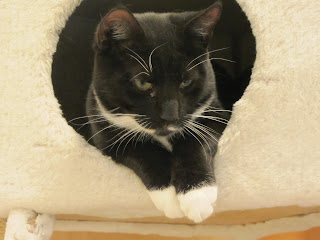