Alright, what I didn't write in the last post because I had to run off to work, was that I went for a little walk to clear my head after the hospital, and wound up walking into shops... and buying stuff. Hah. Got paper napkins, scented candles (lemongrass, yay), normal but highquality tapers in white (since I had only ones in blue, green etc left and they sortof tend to annoy me unless they match other stuff, picky picky..), a new shaker since I broke the old one, incense, some pens and a diary for 08/09 since my old one is ending soon (yep, I am still stuck in the year that starts in august), and a washbag I probably didn't need but which I am convinced is superior to the ones I have. Hmf.

Today. Drafted Christine and her car to drive me, and went and got some plants for my balcony. Looks much nicer now. I still need a chair or something out there so I can sit there and read.. but I guess it will have to wait alittle.

Some pictures of what it looks like now. Just the one end obviously. The other end isn't as nice, it has a Narnia style lamp (except it is mounted on a wall) and a heap of planting-stuff, empty pots and the like - and my old potato-tree from last year, that is finally giving up I think. Guess I'll throw it away (or rather dry the wood and use it, and throw the twigs and the few leaves left away). New potato-tree sitting in a white pot by the wall, this year with white flowers instead of blue/purple. In black low pots, ivy (climbing up the wall) and yellow chrysanthemum. Then in a too shallow pot sits a yellow bush rose (closeup), and in the other pot sits a climbing rose, pink, thats sending an arm up the wall already.

Good thing I am staying at home all summer to care for my new friends! 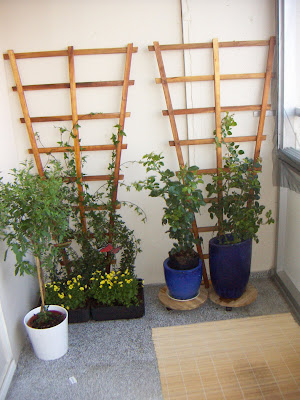 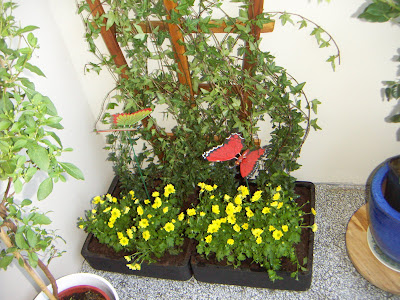 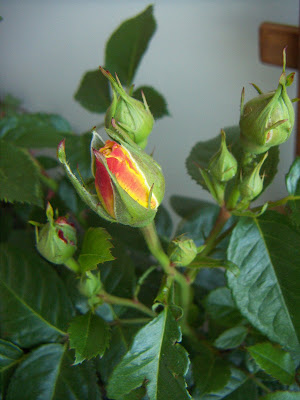