...more photos from Hawaii and the trip home to go through and post, but I thought I would interrupt with an update from home too ;)

Got back here tuesday morning and went to work wednesday morning - jetlagged but still in a "whee" fashion, though I crashed in the evening. However during the day I developed a sore throat, and thursday it was worse. So yep, I got the worst cold I have gotten so far since last spring (was mercifully free of bad ones this winter). To make things better, the elevators are stuck, so its slightly bothersome to go downstairs to, for instance, buy honey, peppermint tea and juice. Today I am starting to cough as well, hope thats not something that is sticking around >:|

Linus came home yesterday, mother and S paid a brief visit early in the morning to hand him over but took off again, wanting to be out of here before the heat became too oppressive. I am glad my flat is facing due east, I get morning sun - enough to heat the flat so I don't get chilled during the day - but before noon the angle is such that I have no sun on my windows anymore, and thus I don't really get overheated.

Was supposed to go to Kajsa's party tonight but with my cold I'd better not. Neither me nor the others will benefit from it. If my current burst of activity persists, I might hang up curtains or organize the bookshelf (finally) - I suspect it might not though, yesterday I crashed sometime between four and five and slept until 0130 am. Fell asleep again around three (I think), after having "breakfast" consisting of the raspberry pies I made with the leftover filodough yesterday.
Still jetlagged in other words, completely on the wrong timezone. Or well, I guess by now I am somewhere in between, I am not 12 hours wrong, but around 6. Still annoying. Gonna try to stay up tonight, so I will sleep longer tomorrow.

Linus thinks the windows and the outside air are interesting. And my bedroom window. :) 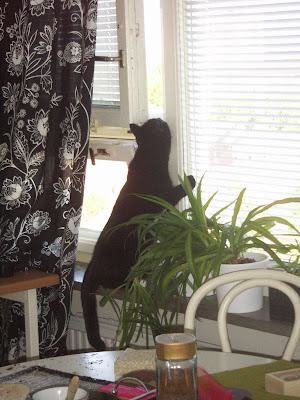 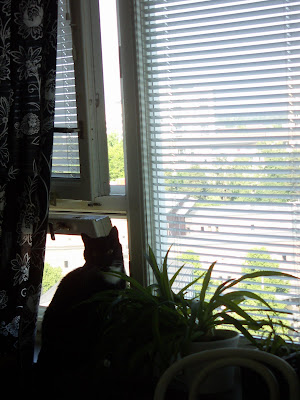 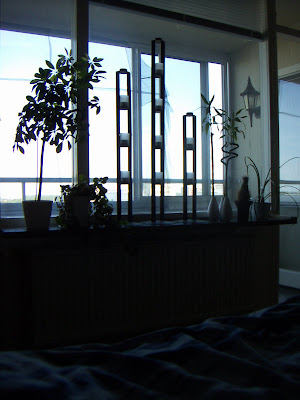