For quite a while I used the nick Shttldrgn on IRC - I remember GM:ing role-playing games when Columbia crashed, and sometimes getting silent and distracted reading newsthreads online and my players clamoring for my attention.

Anyway, I want this tee. Wish it came as a hoodie, that would be perfect in a darker grey or black! Email ThisBlogThis!Share to TwitterShare to FacebookShare to Pinterest
Tags: interwebz 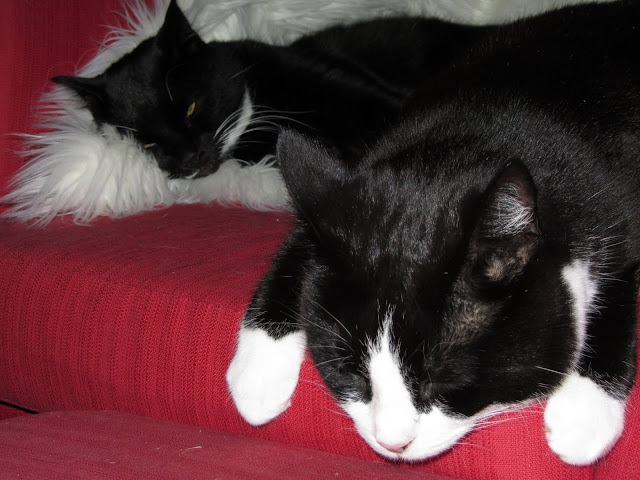 They actually are friendly enough to sleep in the same chair. Unless Ådi tries to lick Linus in which case Linus screams COOTIES, YUCK! and tries to bat Ådi away.
by Silme at: 15:58 No comments:

Email ThisBlogThis!Share to TwitterShare to FacebookShare to Pinterest
Tags: wishlist

Too much coffee, every day and all the time. Withdrawal symptoms (headaches and bad mood).
Smoked a cigarette last week and it started the cravings all over again, after 6 years (weak girl).
Too much shopping (retail therapy?).
Not enough effort at work (lazy bitch).
Too much food and not enough exercise (fattie me).

Some of these are easier to correct than others.
by Silme at: 08:01 4 comments:

I did get to go to Sthlm Pride anyway. Spent the evening there, while they played horrible music. We drank champagne and hung out in a VIP lounge before doing the rounds of the festival area. Lovely evening, thanks dears!
by Silme at: 21:33 No comments:

Email ThisBlogThis!Share to TwitterShare to FacebookShare to Pinterest
Tags: stockholm

Here is the first autumn fashion of 2011 from the Yarndragon:

Illusion
This is, as you probably guessed, not a sweater. It is a fake polo. A tubed scarf, a snood with a bib.
It does the job of a scarf, while looking like a sweater, having no flying ends in the wind, and, best of all, it makes sure no cold air gets to the part between the scarf and your low-cut top. I actually knit it for wearing with my corduroy jacket which I wear year-round and which closes right under the bust, although my new illusion is shown here with a jacket that zips all the way up.

Knit in Manos Silk Blend, one skein of the colour called "Scorpio", in a lace pattern which flares out at the shoulders. The cast-off edge is bound off with an I-cord, the cast on edge is the one you see. It scallops beautifully thanks to the lace pattern. 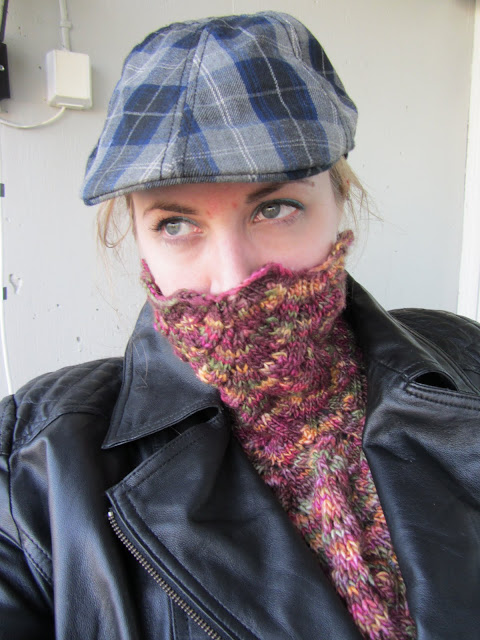 This hat is knit in Drops Alpaca in a blended turquoise and dark blue which I love. The pattern is modified from one made for a thinner alpaca yarn from Du Store Alpakka, or at least that is where I started, but after unravelling the entire thing a few times I simply winged it. Beads from panduro. The hat took less than one ball to knit (maybe 3/4). 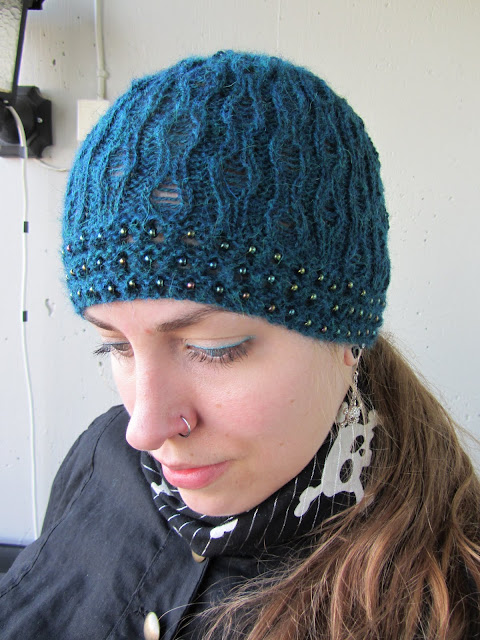 I bought two balls of Drops Alpaca in the blended blue when at Åland on a business trip last october. I was ill, worn out and overtired, and my colleagues were rubbing me the wrong way, so I escaped for twenty minutes of touching and admiring soft fibers in a yarn shop I found in the mall. Two balls came with me home.

I guess that makes this into the escapee-hat?

I really like weird stationary. Post-its with origami prints or weird sayings, nice pens, and other random stuff like this: Itsy bitsy coloured pencils in a little case, just a bit bigger than a credit card. Perfect for my bag and much beloved. From Muji. 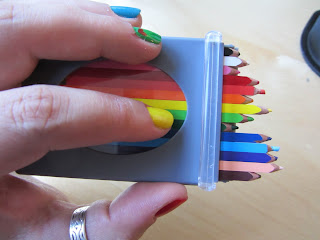 Nail colour for this week 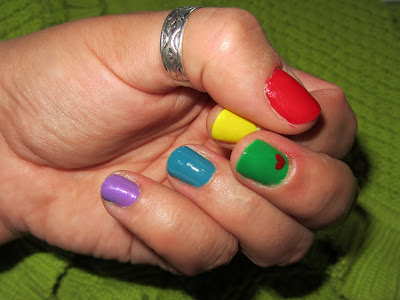 Stockholm Pride Festival begins today. I doubt I will have time to actually go in to the city this week, but hey, I can at least show some opinion through my nail polish? :)

"Traditionally" (ie the past three years) I have had different coloured outfits all week, with matching make-up. Turquoise, Green, Pink, Red, Blue.

Somehow I doubt any of my coworkers actually understood the symbolism ;)
by Silme at: 07:00 2 comments: