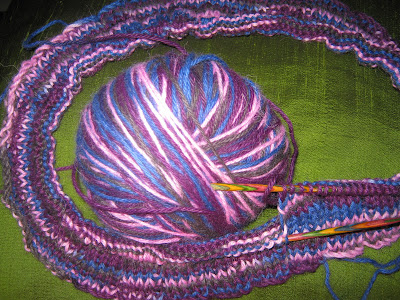 After some careful consideration this project wound up stamped as a Long-Term Project and was laid aside for the coming week or so at least.


Thanks to Lotta at Torgstenen I've wound up starting to knit a snood/cowl in Hummingbird DK, which is a yarn I have been looking at for some time but not quite crossing the threshold and actually buying. A lot of the reason is the variegation of the colour - when it comes to actually using the end result I have noticed I prefer mono-coloured or pattern-knit items rather than chaotically coloured items.

My first attempt att knitting the plain knit cowl out of this was frogged since I accidentally wound up with the perfect stitch number for making big splotches of mono-colour, the stripes in the yarn winding up on top of eachother. Oops. Before that I also tested knitting lace with it, but the variegation makes it too splotchy and it just disappears. Too bad. Now I carefully counted out the stitches so it would become slightly more evenly distributed around the scarf.

Otherwise it is a lovely yarn which I can recommend, although if I decide to do something else in it I will probably go with a different, more earthy, colour scheme. Or simply with the plain coloured variation of the yarn. Still - going to be nice and a bright snood might not actually be such a bad thing for blackdressed me to wear now and then.

Edit: Oh, and if you don't know how to hand-wind a center-pull ball (where you pull the yarn from the inside) - here is a good resource.
by Silme at: 21:27 4 comments: 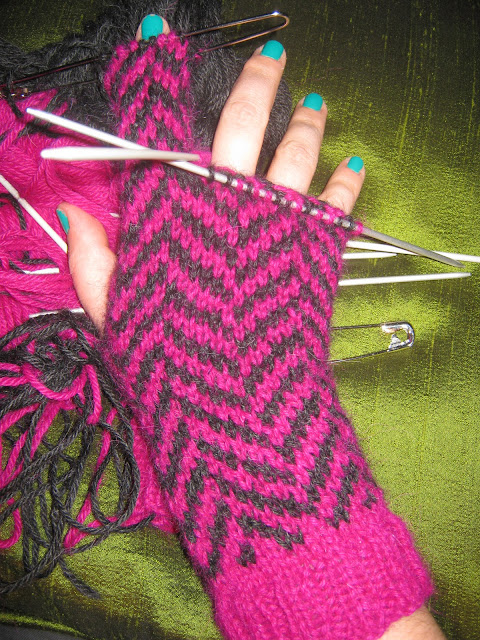 Mittens with a separated index finger from the rest of the hand (a variation of the tridactyl glove) knitted in Schachenmayr Alpaka on 3mm dpns in a nice herringbone pattern. Been ongoing for a long while, I'm afraid - I frogged them down to the wrist once already after completely finishing everything except the thumb. Seeing some progress now but I might need more yarn...

I started making a list of ongoing projects when I realised the project stack was growing and growing without anything actually getting finished. Then I prioritised them; what to finish first top3.

Here is my Top1; done today: 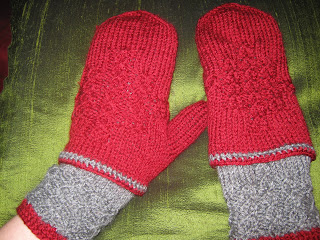 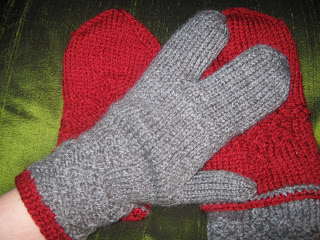 Tridactyl gloves with crocheted contrast edge and cable ribbing, with contrasting over-mittens for added warmth (with a matching cable pattern on the back of the hand). Carolina acrylic yarn on 4mm DPNs. They became very warm and comfy, the double layers catch lots of lovely air to heat up!
by Silme at: 21:08 2 comments:

It is three weeks since I got the strep throat. Got 8 days to go on the second antibiotics cure. The second doctor said I had a resistant strain; but since H also caught it by now he went to see a doctor as well and that one said I had just gotten the totally wrong antibiotics to begin with.

Whichever the truth; the ones I have now seem to be working and I am slightly mad that I didn't get ones that kicked strep ass to begin with. I mean, three bloody weeks of illness. After one weeks sick leave I went back to work, and tried working, and failed rather spectacularly, and was spending evenings crying myself to sleep certain that I was dying from lung cancer or something other bad since I just was getting worse and worse and coughed until I puked. This week too I have tried to work, but it has gone so and so. I feel guilty staying at home and the doctors are under governmental orders to be strict with sick leave, so as long as I can sit and type I should be able to work.

This too means I am not getting well since I never get to rest - and keep going out into the freezing air and spending hours there. In the end my boss, one of them, my old boss, put her foot down and told me to stay at home today and rest the weekend, in the hopes that I will be well next week. My prolonged illness is hurting my work, and it is hurting me financially. Still, not much I can do but hope I get well. And truthfully, the new pills are alright. There was a noticeable improvement after two days - what you expect on a strep throat + antibiotics.

I also got a flu shot, for free, since I am a risk group two times over. Yay for flu shot - so hopefully I won't be knocked for another four weeks this winter!

That is the issue of being without much of a working immune system. The one I have spend most of its time attacking other parts of my body - parts that are not a threat, but which are failing under the constant attack from my white blood cells. Since they are busy fighting the wrong wars, the way is open for all sorts of bugs and I get ill extremely easily. And due to the asthma common colds strike me hard and knock me out properly.

Maybe in a few decades there will be possibilities to do a cell transplant to fix autoimmune diseases like arthritis. A girl can dream...
by Silme at: 19:14 1 comment:

The debate between wood and metal needles to knit with continues.

Here comes some pros and cons:
- A lot of my metal needles have a very pointy tip, not a steep incline, which makes knitting easier. Alot of my wood needles are the opposite, as a narrow tip is weaker and could break. Especially in the thicker gauges this is an issue.
- If you sit on metal needles you either get your butt speared or you won't notice (depending on angle). If you sit on wood needles they are likely to break. At least one of my MK eco DPN's turned up cracked in two in the sofa... I used an emery board to make it into two cable needles, so it got a new life. But seeing as I often drop needles and the risk of them being sat on or kneed on or stepped on is high, that is a big con.
- I have been knitting with knitpro interchangeable needles (the wooden rainbow coloured variety) lately and I adore them. They have narrow enough points, slide easily, are flexible, and great on my hands.
- However the big con with knitpro: They are laminate wood. So they might crack.

My 8mm needletips kept catching on my fingers and on the yarn, and I thought I was imagining it (checking my fingers for hangnails and flaky skin first!) before I realised that the laminate had split apart. Wonder if there is a warranty on them, since it was the first time I used that particular set. On the other hand I am so shy I find it embarrassing to come complaining to shops I like about problems! I don't want to be a nuisance, they are great! Anyway, see how the fiber got stuck in the cracked wood? Bah. Maybe I should try plastic tips.. however I have heard they are not as good (you get what you pay for). 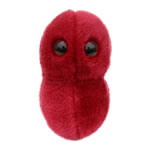 Apparently the reason I never get well from my cold I got in september is that I have resistant zombie streptococcus bacteria living in my airways. Got a broad spectrum antibiotic and hopefully that will help. It would be nice to stop coughing and to have some energy over, after over two months of more or less illness.
by Silme at: 09:40 No comments:

Email ThisBlogThis!Share to TwitterShare to FacebookShare to Pinterest
Tags: health

Swedish patterns, or how to knit a huge hat

I have followed patterns before. English ones.
On an impulse I got a Swedish pattern with some yarn I liked early this autumn, and have since then struggled with interpreting it and making the result usable.

Finally finished off the hat (there are more pieces but they are, as of yet, not started) - nice enough, except for one little thing.
Yea. So it is a bit big. And that is after I went down two needle sizes, skipped some rows, and did my best to knit tightly. Now I just wonder... is it meant to be super huge, was the pattern made for people with abnormally large heads (my head is rather chunky), is there a series of mistakes in the pattern, did they just reprint it with a different, thicker, yarn hoping it would work, or did I in fact make some fatal mistake that I haven't been able to trace?
by Silme at: 11:03 2 comments:

Turned out the santa's sleigh idea was too much work to be realistically possible.

So about the time my fever went down and I went insane with boredom today, I sat down at the drawing table and put together twelve cards out of simple squares of paper which I stuck together with tape, and glued ribbons and blingy things onto.

Simple, but fairly straight forward and if I repeat it one more day before christmas I will have enough for both family and my online friends. Hah! All done through a slight fever haze! 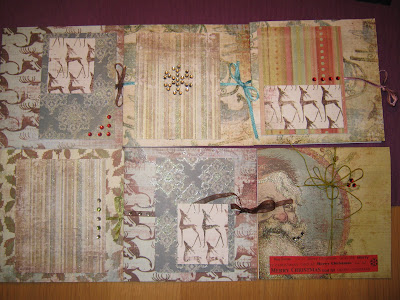 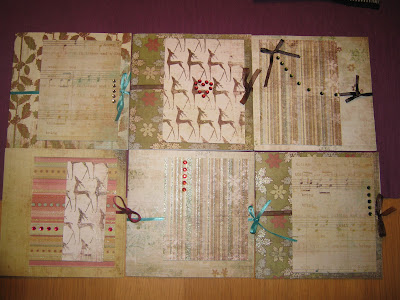 I am ill again. Again! This time I got antibiotics though, so hopefully I will actually get well this time, not just "better" and then worse.

Bored out of my mind at home. Doctor said I am contagious so pretty please stay at home this week. Aaargh! Restless energy. Although I do collapse and sleep fairly often through the day, so I am far from at my best.

Still, have to do SOMETHING. A colleague is bringing me my work laptop which was left at work, so I can do some administration later this week at least.

Today I started pondering this years christmas cards and design. Each year we send Christmas cards (and sometimes valentine cards) to eachother on this forum I am on. Very cozy and so nice to get a bunch of cards in the mail for Christmas. I handmake mine each year.

Unfortunately, the final cards wont be as prettily backlit as my worktop is :( 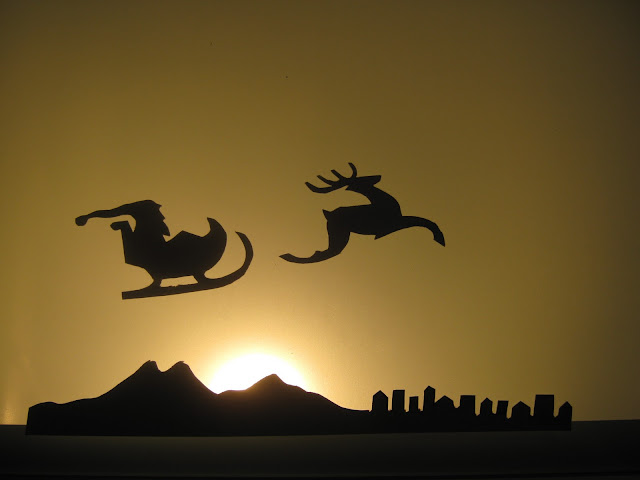