All of a sudden I understood how crocheting works. So I started crocheting a pair of mittens.
Since I am halfway into knitting two other pairs of mittens, that was unfortunate - the more projects running simultaneously the less likely that any of them will ever be finished.

The amusing part about the crocheting is that I don't know how many times my mother, and various friends and teachers, have tried to teach me, but my brain refused to grasp it, then one day as I am sitting at home doing something completely different I suddenly understood it and proceeded to start a pair of mittens, which I have shaped to fit the curves of my hands (in all honesty I first knit a little hat that fit my finger to test my theory, which Linus immediately adopted as a cat toy). Crazy how the mind works. The coin dropped, apparently, and hard.

I guess the web will contain explanations of how to do the things I cannot figure out on my own. But first I should actually try to finish the knitted mittens, to get something warm to wear!

Else? It is Sunday. The day I water plants, make sure the dishes are clean, and cook up a few lunches for the coming week.

Next weekend Raptorian are coming to visit - 24h in Sthlm. Long time, no see - looking forwards to the visit!
by Silme at: 13:02 No comments:

I felt rather sorry for myself, then started thinking back. Back to august 2009.

I couldn't open bottles on my own (hands). Or heavy doors (elbows). Or walk up or down stairs (knees and hips). Or walk at all without limping heavily (toe joints).

The pain was familiar, had increased slowly over the past 20-25 years or so. But at that point, so bad that I was getting very handicapped by it. I could type, my crooked hands could move across a keyboard. I could read. Finding a position to sit in that was as painless as possible was very difficult.

The doctors had always frowned and said they did not know why I was in pain. All sorts of tests had been made and remade. This time I was told to eat some more ibuprofen, in a letter from my doctor along with another set of negative test results. I was already eating so much of the stuff I had stomach problems without getting much relief from it. Now I got so mad I started nagging my doctor daily. "So, the tests were negative, how do we proceed now?" -

He sent me to a rheumathologist. Finally. It took a month, but when I got there she merely looked at my knees and feet, and stated that I have arthritis.

I couldn't stop thanking her. I mean, just the word. Knowing I wasn't making up pain, that it was real, all these years. Then she added to my gratefulness by giving me pills that slow down the inflammation.

Today? Pain, but by all hells, I can walk up the steps to the front door of my building and open it. That is such an improvement.

Email ThisBlogThis!Share to TwitterShare to FacebookShare to Pinterest
Tags: arthritis 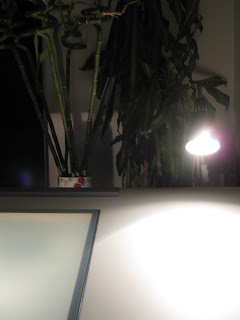 My living room is still extremely messy and chaotic, but bits and pieces are (finally, more than a month after I started) beginning to take shape.

Drawing table (with backlighted glass pane - I have wanted one of these for as long as I have known they exist, which is something like 20 years), and a few of my plants placed straight in front of me in the little strange corner that sits randomly in the middle of the wall. I like looking at green living things.  :)

This means everything is painted, and built, and the only thing left to do is one hell of a cleaning job, putting things into order. And to set up a working computer at the computer desk. Hrm.
by Silme at: 17:55 No comments:

First snow and the cousin mittens

This morning we awoke to a thin layer of white. I was planning to take photos of the mittens I knit for my cousin (if she wants them - she might have other colour preferences?), and the weather was highly suitable for taking outdoor photos of them, so a short trip out on the balcony commenced. 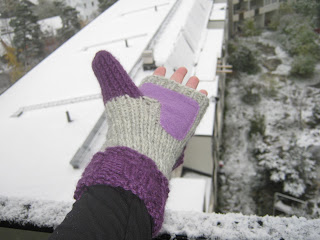 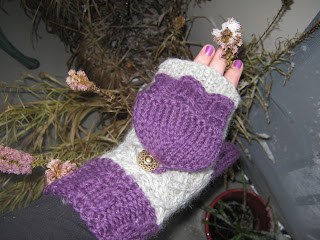 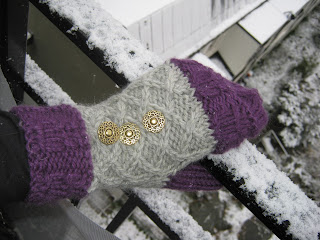 Out on the balcony I also found some pot plants of the indoor type which I had forgotten I had put out there during summer. They looked very green and healthy though, I suppose they enjoyed the fresh air. Now that they were snow covered I chose to move them back in :)
by Silme at: 09:46 No comments:

Why I sometimes sneer openly at compliments

I am fairly good at improvising. My Norwegian/Literature teacher put it something like this back in the days when I asked if she would write me letter of recommendation: "Because [she] reads so much and continually takes in information, she easily adapts what she knows and the reflections she has already made to new material." Back then, when I read it, I thought "Whoa, do I do all that?" - I was eighteen. Now, so many years later, I am aware:

Yes, I do just what she said.

The ability manifested for real when I got my current job, I might add. I am continually short of time, I am extremely absent-minded and frequently realise I am about to go unprepared to a meeting, for a presentation, or seminar. Yet I somehow get away with it.

I don't feel pleased at the things they say. I get annoyed. Very annoyed.

One of the most despicable things I know are untruth. And what they say is untruth. They might not be aware of it, but that just makes it worse, because that kind of blatant ignorance is despicable too. A kind of weakness that I cannot tolerate.

If they would only say "I know you will be able to handle the meeting perfectly well, because you have so good background knowledge." Or something else that I could actually take some pride in, feel good about, that would be so refreshing!

The reason for this post? We have been working on positive feedback and everyone gave eachother positive feedback in what I felt was a rather forced situation. The only REAL thing I heard was from my boss who told me I am a fighter that always gets where I want. The rest was.. creepy. That my closest colleagues are so ignorant of how I function, of how I work. I know that in a way it is good that my facade keeps up but.. I am not cynical enough.
by Silme at: 20:22 2 comments:

Email ThisBlogThis!Share to TwitterShare to FacebookShare to Pinterest
Tags: work

For some reason we were in Paris when the water started rising.
by Silme at: 07:12 4 comments:

Email ThisBlogThis!Share to TwitterShare to FacebookShare to Pinterest
Tags: dreams

I have been knitting with metal needles mainly most of my knitting career (career, ha ha), with some plastic showing up the past couple of years as well as a set of bamboo needles I bought back in school. Late summer I bought wooden needles in different variations and it is a different experience altogether. Which is better is hard to say, but overall it is more comfy on my hands with wooden needles. However I like the tapered ends of my old metal pins better; they have a longer slimmer point which is easier to handle. Not all metal needles has that of course, so it is a matter of manufacturer more than material. And luckily for me, the knitpro needles also has that tip - in a slick beautiful wood finish.

I will soon write about something else than knitting. Promise.
by Silme at: 14:20 1 comment:

Tidied up and updated the link lists. Much neater and more up to date. :)
by Silme at: 09:01 No comments:

Email ThisBlogThis!Share to TwitterShare to FacebookShare to Pinterest
Tags: interwebz

An exhausting trip with work to Åland for four days, and a busy work schedule both before and after means this is the first night in more than a week I have had time to actually sit down at home.

Linus came home two nights ago, very happy cat, very happy to be home that is. Poor boy. But it is flattering to be so missed. He is patting me, stroking me, instead of opposite now, as if he is reassuring himself that I am real.

Work is so busy - especially mentally, I am being challenged! - that I hardly know where to turn. My nails are bitten painfully short just out of restless energy - and sleep deficiency is catching up. Need to rest soon. Luckily the weekend will hopefully mean just that - as well as getting some stuff done at home.

The knitting projects are many:
Mittens for Cousin Lisbeth
Mittens for myself (buscard mittens)
Mittens for myself (testing to knit in alpaca)
Pineapple hat (entrelac in a speckled brown colour with a green pompom on top)
I want to knit blue gloves out of the same yarn the fish head is made of
I want to knit tabi socks
I have some really nice tweedlooking alpaca yarn in a beautiful petrol colour I want to do something nice with
I have some totally great blue soft stuff I bought together with the petrol alpaca at the work trip (I escaped for half an hour) I think I want to knit a hat out of
I have the Samo hat+snood I began in Norway

Hardly know where to start.
Actually I do. The cousin mittens. But after that I dunno. :) 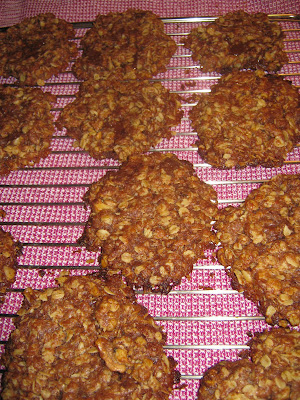 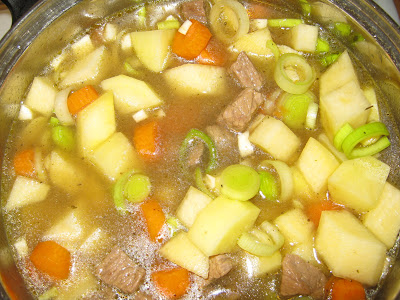 Email ThisBlogThis!Share to TwitterShare to FacebookShare to Pinterest
Tags: food

One would think I do nothing but knit, but in reality I mostly do other things.

Tomorrow is my last day off, monday it is back to work.

Apart from the fact that I got another cold that knocked me out for pretty much two weeks straight, it has been a nice four weeks. I wish I had stayed well, I would have gotten more enjoyment out of the time off. Now it'll be another year. My boss called thursday, and warned me that a lot has happened while I have been away, and gave me some hints to help me adjust, as she said. Love-ly. It is also the start of my new responsibilities at work for real. Scary, exciting. Most probably fun.
by Silme at: 18:30 2 comments: 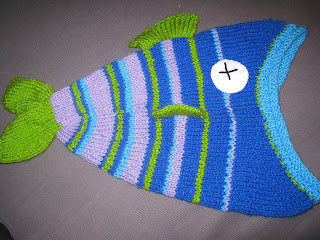 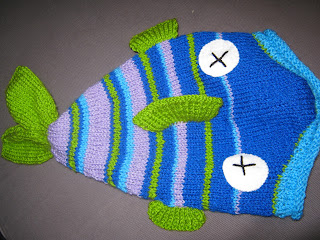 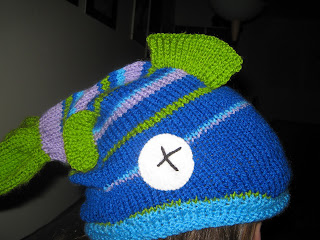 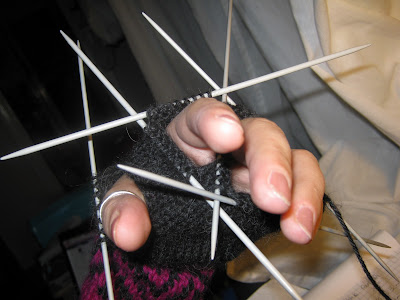