The day before NYE

So, I should be tidying, right? (Especially since I will be hosting both brunch and a dinner party tomorrow)

Well, I got home not too long ago, then spent some time writing a complaint e-mail because my hair conditioner I bought on teh intarweb is expired (!), then I realised my blood sugar was very low so I had to eat, opened the fridge and realised there was turkey blood almost everywhere (hooray...). Guess it didn't come securely packaged from the shop, which I had assumed... So now I have cleaned the fridge and everything below turkey-level in it (and thrown away some stuff), and eaten, and I really should lift my ass and start tidying.

I was intending to post another christmassy picture of a tree in the last post too, but that was in the other camera which has a flat battery. So later, when battery is charged and stuff.

Do you think putting all the stuff on the sideboard in a cardboard box and hiding it in the bedroom is a feasible idea? :)

I know that is just postponing it, but it will be SO much quicker right now. And then I can use the sideboard as a drinks table. The kitchen.. we are going to mess that up cooking anyway, so I am not too worried. Dishwasher will take care of most of the mess. And with that I think I'll be almost done, just a sweep with the vacuum cleaner and moving some items around, a fresh table cloth (bought new ones instead of cleaning and ironing the ones I have.. much quicker and besides, better looking!), and well.. I think that will be it, and I will be able to mix myself a drink and curl up in the sofa knitting and watching something about houses and design on tv. Or then I will, belatedly, start watching Heroes season 2.

And I guess I am just ranting to avoid starting.

Other news:
- Mia is back in Sweden after her overseas journey, welcome home Mia!
- I still have a week of vacation to enjoy before going back to work.
- Mother left friday and Linus is very happy about it. By the way, the two photos of him in the last post are taken on different days.
- N has gone off for the week, he is celebrating NYE in Varberg and then going away for work. Next week he will be beginning work in Sthlm - time for me to seriously start looking for a new flat.
- IRC is as dead and boring as ever. Entertain me, dammit!
- I have lots of christmas cookies left. If you live in this part of the woods and would like some, do come by!
- I finally got my medicines, from a different pharmacy that wanted customers unlike the one in Kista where they prefer not to sell anything to anyone. 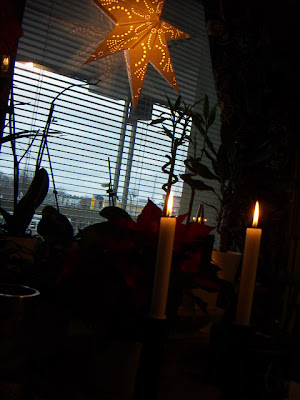 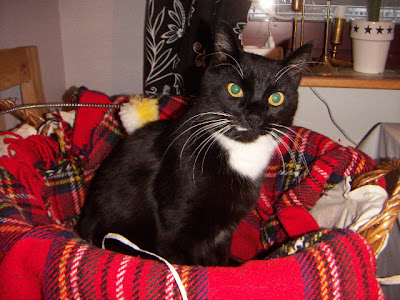 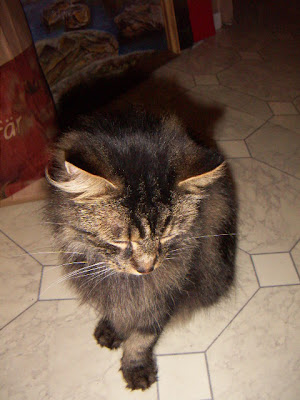 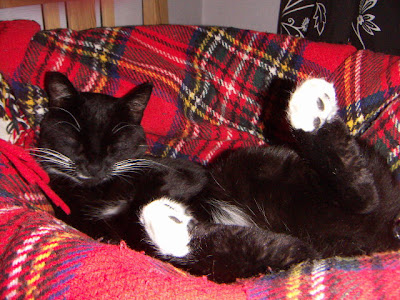 Second day home, I have a cold. I thought I was all good last night, but no go - this morning I was fevered and as bad as ever. Wish me luck for tomorrow.

I am bored. I have painted itsy bitsy aquarelles (yesterday, two of them), and knitted a third of a sock (today).

There is nothing on TV. There are no books I want to read. Meh.

Email ThisBlogThis!Share to TwitterShare to FacebookShare to Pinterest
Tags: random

So, anyone that feel they should be on my card list? Please send me an e-mail with your adress if you feel you should. And yes, I am talking SNAIL mail cards here!