Artesano Silk Embrace, one ball turned into a bright snood!

One of my promises to myself (threats?) was to try to write down my patterns and share them. Here is the first one I actually went ahead with and noted down. 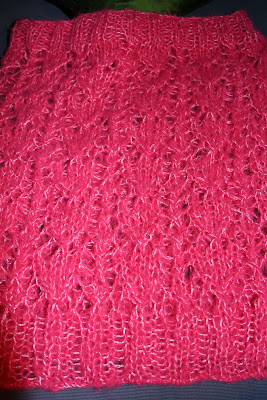 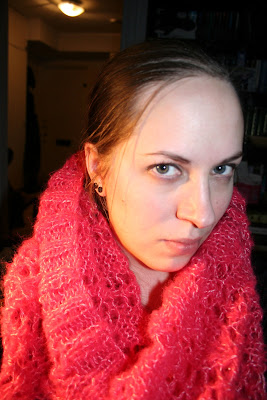 Needles: 6mm, knitting in the round. I knit loosely, but I recommend trying to knit to the gauge noted on the yarn (when knitting stockinette) or a bit looser.

I used a knit cast-on method as it is somewhat firmer and thus like the bind-off edge.

Begin lace pattern. Place marker at the start of round.

Variations:
If you want a narrower snood you can cast on 8 or 16 stitches less, and add one (for 8) or two (for 16) pattern repeats. Similarly for a wider snood that can be wound twice around your neck, add 8, 16, etc and remove pattern repeats. This version does go twice around if I want.
by Silme at: 20:33