This plan has been underway since sometime just after Christmas when I decided it was a nuisance if I had to do something at the computer for more than 1-2 minutes, seeing as the monitor is in the shelf.

The basic plan has been the same all the time; to mount another shelf in front - the means of doing so has varied in my head through the months. I wanted it to be detachable, so that it wouldn't be in the way when I wasn't working.

In early february I bought the bar stool, thus getting a step closer to finishing the plan. And last week I hatched the plan that was the one that came into being: Instead of having the worktop completely detachable it is hinged and folds down as a door over the shelf beneath it. I am going to re-arrange the contents, using that shelf more as a storage unit.

Works fine - but it gives a little bit too much, not as stable as I would have liked. I am going to solve this by simply adding a piece of twine to support it from above. And I intend to paint the edges, which are raw still. What do you think? 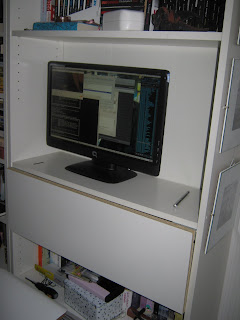 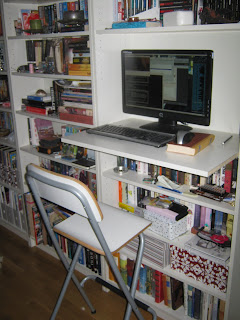