So, a more full account of my day.
In the morning I slept in, thanks to Tim & Kiti, who I don't think realised that my wish to come in later had nothing to do with the 1 beer I had drunk tuesday night but rather the fact that I was terrified someone would suggest singing for me at the weekly meeting for the department.
That fate avoided, I caught a late bus - which crashed within 20 meters. Slid on the snow, took down some road signs and smashed into a wall. Yay. Off the bus and taking the more reliable metro...
Arriving at work, there were things on my desk. 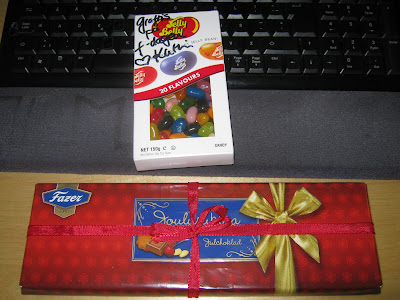 Fazer Christmas chocolate and jelly beans! Me being me I didn't know whether to be touched or embarrassed, so I wound up pushing them to the side and getting to work.

Since I didn't have lunch with me for once, I went around asking coworkers if anyone wanted to go out for a late lunch with me - of course most had already eaten. However my boss volunteered, and then proceeded to take me to a posh place (at least pricewise for being a lunch restaurant!) and bought me lunch there. Definitely getting embarrassed now.

Not much more really happened that is out of the ordinary; I was going to go buy wine but was too late and they closed in front of my nose. Instead I bought tea - I have a birthday tradition of drinking a really good tea, preferably one I haven't had before, and eating a cookie. This year I bought the Prince Vladimir tea (by Kusmi Teas) that I have wanted for a while and been sniffing every chance I got - and guess what! It was as good as it smelled. A baguette and a ripe camembert completed my evening meal. Yes, I know, tea might not be the best thing to accompany that but I drink tea with any meal. Tea is good.

The best part of the day? All the greetings online, which I don't find embarrassing. Pretty much every communication medium I am on (different sites, IRC, other instant messengers, forums) had greetings for me when I logged on. Touching! <3
by Silme at: 05:57