I looked out the window a while ago, and noted that half my view was covered in white. Like the window was misting. I didn't investigate.

Half an hour later the world was milky white, I can barely see the nearest tree. Peasoup fog, at least on this level. Maybe it is more open closer to the ground.

The lifts were working when I came home friday night. Yay. Especially yay because I had been walking for quite a bit already - bought alot of things involving cables: Replaced the plug on my bedside lamp (the plug of which I accidentally broke in two a while ago), split the sound cable from my computer and stretched an extension into the bedroom, added speakers there. New earphones, since my old ones (which had in all honesty survived for some years) were starting to make strange buzzy noises. Extension cables and lamp cables, now I have two paper stars up and lighting (one neon green and gold in the kitchen and one white in the livingroom, though I might switch them around.)

Also I bought jelly beans, and I spent a few minutes sniffing my favourite teas (Kusmi tea Prince Vladimir and Anastacia). (I managed to keep it to a few minutes, not an hour..)

The weekend has been spent doing not much at all. A lot of paper folding; got several meters of folded streamers, and alot of small stuff. Watched a few NCIS episodes. Finished reading Mortal Causes and started reading Let it Bleed (both Ian Rankin).

Thought about my dream earlier in the week, quite alot.

Oh! And I received my new glasses, finally! Here they are: 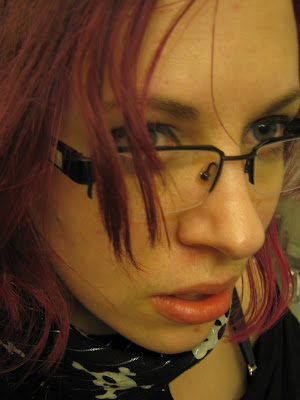 Someone asked me what happened to my nose piercing. It is still there, nothing happened to it, but it is always (pretty much) on the other side of my nose from the camera. The reason for this is that if I take photos of the lame side of my face I always look a bit strange, since parts of my face around the left eye is paralysed. To be honest I probably look a bit strange all the time for those that are around me then, but I don't like to show off that little defect. It's not like I ever choose to post the photos where I look like myself anyway...