Today I went to Memira for an eye checkup since I am eating medicines that can cause blindness. I do not want that so I will do my yearly checkups while I am eating that. I like going to Memira because while their receptionist (at the clinic on Vasagatan/Sthlm) is rude and unfriendly, their doctors and optometrists give the most honest, explaining information regarding my vision I have ever gotten (I actually have better natural vision than a year ago thanks to them - no surgery required!), and they are very good at what they are doing. So I will rather go there than anywhere else (at least unless the anywhere else is someone I trust as much), and thus I pulled strings at work and yes, they were willing to make an exception and let me do that checkup even though it is not included in our deal. Yay!

To be able to look deeeep into the bottom of my eyes they gave me two rounds of eyedrops to distend my pupils. It worked. As you can see. This photo is in fact after the examination, after I walked to the train, boarded train, travelled with train, went off train and walked for 15 minutes back to work. Photo by Max, thankyou Max. The reason I look kindof retarded is that I could not see anything. It is surprisingly difficult to look anything but retarded without focus, I found. Probably just me.

Going back to work was no fun at all. I didn't have my sunglasses with me since I was not aware of the pupil distending drops - and you can imagine how light sensitive I was with those eyes. Also I couldn't get a focus on anything. Very annoying. I was terrified when crossing streets - crossing Vasagatan I trailed a person very closely to make sure I wouldn't get lost and run over by a taxi.

Luckily the important part of the day's work left was meeting a person from another city, who gave me very strange looks. Had to explain that I was not drugged. Thus, still not able to work well, I gave up and went home half an hour early. Now, six hours later, things are starting to feel normal - as long as all the lamps are left off... 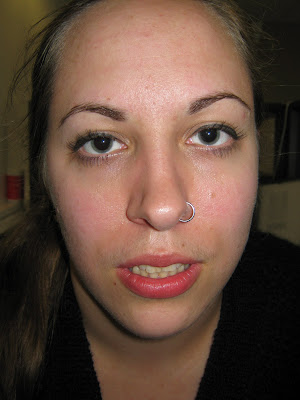