I took these ages ago. This is stuff I am going to sell - but I never seem to get around to it. I am no expert but some googling tells me late fifties - sixties. The grey one is Norwegian (Figgjo Flint) and the orange/green is English (Kathie Winkle/Broadhurst).

While I think they are lovely, they really don't fit with my general style so I have to part with these treasures. Putting them up here is mostly just in my normal random style, I don't really expect to get them sold via my blog, but if you are interested or if you know someone who might be; get in touch (located in Stockholm, Sweden). 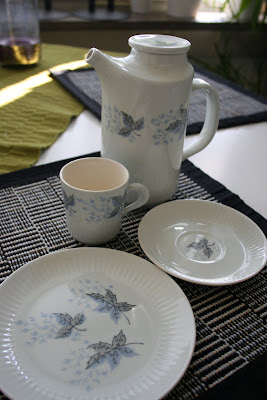 General information: There are a bunch of cups and saucers and plates with each, not just the ones in the photo. Both sets have six plates, six saucers. Renaissance have four surviving cups, the FF one five (I think). The FF one also has a tea/coffee pot. 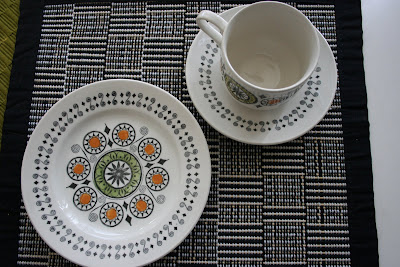