N.'s birthday was last week, and he told me I wasn't allowed to buy him a gift, but that he'd like a cake. However the morning of his birthday, he changed his mind about cake as well (to my relief, as I can bake bread and simple cakes but not the kind of creambomb he prefers).

Friday his mother and her mate appeared, two days early (since she wanted to avoid the heatwave we are currently having), with their gift: new taps for the bathroom, both the tub/shower and the sink. Since the old tap in the sink was very, very leaky + the hot-water wasn't working, that was a relief. They also installed the things. 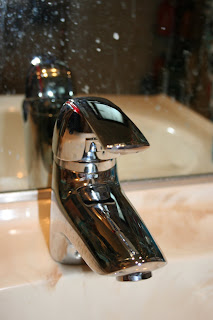 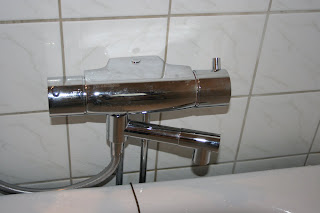 That left us with the old shower head, very worn (probably original from when the flat was built, along with the tap!), which didn't match the new shiny things. Thus I was actually allowed to buy him a gift as well: A new set. The shower head that came with the rod looked like UFO, so I got a separate one with several functions. All of that took the last of my saved money (no wardrobes in the near future but hey, this is good too), but feels worth it. 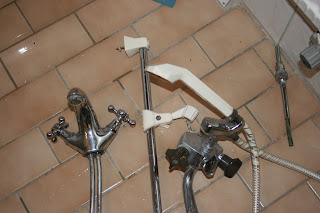 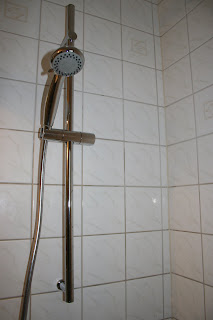 They also brough art, inherited from N.'s grandparents. Artist Lars Norman which I have never heard of and which google didn't know much about either. I really like the one of the brides, the other one is eh. Note the nice mirror image of me photoing it. And do you like the colour of the livingroom wall? It is slightly darker than it looks like on the photo. I really don't like it, oppressive! 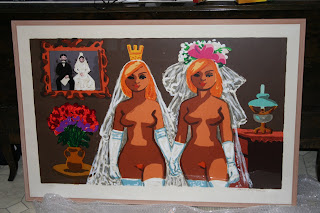 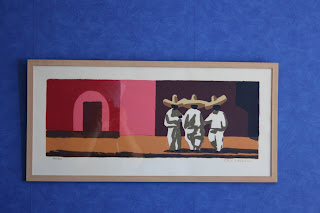 So, why am I posting things on my blog in the middle of the day on a monday? Yea, as you might have guessed I am home, though very reluctantly. Spent most of the night lying awake feeling feverish and with a belly ache, as morning approached the toilet visits began. The combination of about 2.5h sleep and the frequency of my sprints to the bathroom, told me it was a good idea to stay home. Sucks though. I'd rather be well and at work. Really. And no, I have no idea what is wrong with my stomach. If I stick to a diet of sallad and meat baked in the oven with only a little spice, I can live a pretty normal life, though my stomach hurts alot anyway, but if I even think about eating anything else the war starts over again. I can't even begin to guess what made the difference this time. The half cup of coffee I allowed myself? The reindeer-dinner N. cooked? The chinese food friday (slow reaction if so), the icecream, the bread I ate for breakfast? Bah. I have gotten used to my tummy hurting all the timy though, and I know where I can find toilets most of the places I go, so I survive.
by Silme at: 14:16